This solemn bronze cross is a rare example of Central Italian Romanesque metalwork and has engravings of exceptional finesse. Especially the side formerly used as the reverse has a wonderful array of figures, dominated by a large Cristo morto, three renditions of angels on the arms and the Byzantine motif of the Hetoimasia above. They are set against a background of stipple engraving arranged in a foliate pattern and the whole is framed by a dotted border. Especially the expressions of Christ and the angels and the sweeping folds of their drapery are of astounding quality for this early date. The other side of the cross originally supported a three-dimensional Corpus Christi. The closest comparison in terms of motifs and style of engraving is a smaller cross in the cathedral museum of Città di Castello in Umbria, which Del Grosso dates to the middle of the twelfth century. Until the emergence of the present cross the Città del Castello cross was the only one known to include the Hetoimasia. The two crosses also share a thickness varying from circa 1.7 to 2.7 millimetres, the result of hammering the copper cross before engraving. 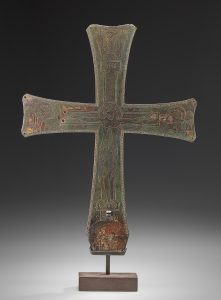 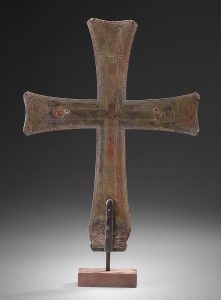 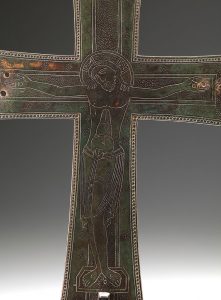