Buckle and tongue from a marriage belt

This exceedingly rare work of secular Renaissance silversmithing is an important addition to a small group of fine belt fittings made in Milan in the second half of the 15th century. Only six similar belts are recorded: two from cathedral tombs in the Museo Civico of Novara, and single examples in the Museo Civico in Turin, the Museo Poldi Pezzoli in Milan, the Louvre, and the British Museum. The fittings from the group are of slender rectangular shape with floral terminals and either filigree decoration or, like here, robust silver borders intricately decorated with twisted wire and rows of engraved and punched patterns. Small nielli or enamels are mounted in apertures along the fittings and generally represent symbols of love and heraldry, as well as profile portraits. The presence of similar belts in contemporary painted portraits, the Sforza archives, and a letter from 1451 that records Marco Parenti’s commission for such a belt show that these rare belts were intended as precious personalised gifts. They were exchanged by the Renaissance elite to commemorate both friendships and betrothals. 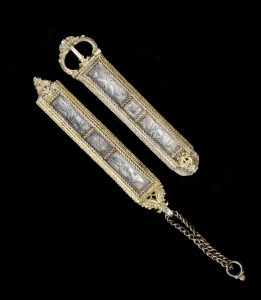 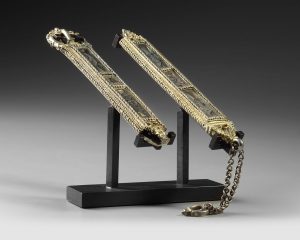