Diptych leaf with the Dormition of the Virgin

This fine panel is a rare example of a fourteenth-century Italian ivory carving. The traces of two hinges indicate that the panel used to be the left wing of a diptych. In the middle of the scene, the deceased Virgin is surrounded by twelve apostles and Christ, who carries her soul on his arm. The decoration of twisted columns on the sides is a typically Italian motif, which also occurs in a panel formerly in the Robert von Hirsch collection. In that ivory panel the same ornaments are repeated, such as the five gothic arches, ornamented with a trefoil and a lengthened tympanum, further decorated with a simple flower. An identical row of pearly dots adorns the upper part of the panel. Furthermore, the figures in the two panels possess the same elongated features and hands. It is therefore highly probable that the two ivory panels stem from the same workshop. 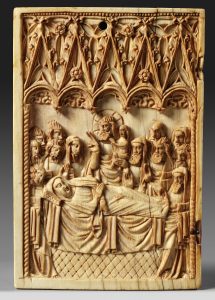 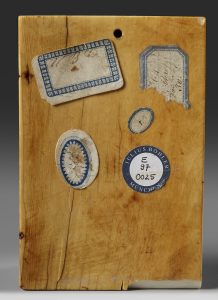 S-11.Ivory.photo2 Northern Italy or Venice,
second half 14th century
Diptych leaf with the Dormition of the Virgin
Ivory
10.7 by 7.2 cm.