Lot and his Daughters

This extraordinarily lively ivory relief of Lot and his daughters, a fully documented work by “the Phidias of the North”, Francis van Bossuit, has not been seen in public for over 140 years. Not only is it recorded in a print in Pool’s 1727 monograph on Van Bossuit, the Beeld-snijders kunst-kabinet, the relief is also one of only two of Van Bossuit’s works of which drawings survive by both painters known to have passionately sought out and studied Bossuit’s carvings, Willem van Mieris and Barend Graat. The painters saw the elderly Van Bossuit sensualising a controversial biblical scene in a magisterial three-dimensional composition, creating the ideal conversation piece for the Kunstkamer of a wealthy Amsterdam merchant. The relief was last recorded in the 1880 estate auction of Justine Rutgers van Rozenburg, Baroness of Heemstede, appearing in a photo in the catalogue alongside other important ivories by “Francis”, as Van Bossuit was commonly called in the Netherlands during his lifetime and well into the nineteenth century. 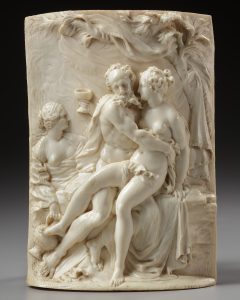