This small pilaster panel depicts Saint Lawrence, wearing a pink dalmatic. He is holding a palm branch in one hand and a gridiron in the other, both of which refer to his martyrdom. The panel used to be part of the Borromeo Altarpiece which Michele di Matteo made for the Church of Sant’Elena in Venice. During the Napoleonic suppression, the forty-eight pilaster panels were removed from the object while the remainder of the altarpiece was left intact. Of the known pilaster panels the Saint Lawrence-panel remains the only one that has kept its original shape, showing the traces of a gothic arch that was part of the frame. Therefore the Saint Lawrence-panel is a vital document for the better understanding of the Borromeo Altarpiece. 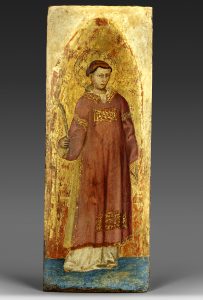